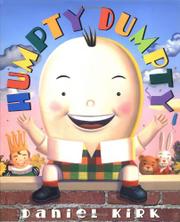 In this happy-ending remake of the nursery rhyme, a boy king gets over his shyness by doing himself what all his horses and men couldn't. Having put his fragile shell in danger several times to watch a parade, Humpty pays the price at last with a shattering tumble into the king's carriage. Reassembled with a few Band-Aids, Humpty recovers so quickly that not even a crack is visible by the next page. There another kind of bonding ensues as Humpty praises the king for being thoughtful and patient (readers may wonder why, since he doesn't display either trait), and the king admires his ovoid new friend's courage, which looks more like recklessness from here. The cut-out photos of faces and other details tucked into Kirk's (Moondogs, 1999, etc.) tidy, smooth-surfaced paintings will prompt double takes from viewers, and some chuckles, but the trite plot and long, monotonously rhymed text will get a polite reception at best. (Picture book. 4-6)