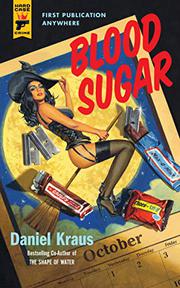 A troubled man plans to unleash his rage on trick-or-treaters with tainted candy, enlisting the help of three neighborhood children to carry out his plan.

Robbie, who has “all this pussy ass black hair down his neck plus pimples all across his flab cheeks and the saddest little mustache you ever saw,” is a 30-something man who lives in a crumbling and cluttered house on the decidedly rough Yellow Street and counts young narrator Jody, Jody’s little foster sister, Midget, and Dagmar, a girl from the right side of the tracks, as his only friends. In middle school, Robbie was a football star and local hero, but multiple concussions and abuse at the hands of a coach have left him a wreck of a human being, one who plans to poison/maim/kill children with Halloween candy. He gives Jody and Dag the job of stocking up on supplies. Lord of the Rings–obsessed Jody narrates with an exhaustingly scattershot and affected tough-kid lingo that calls to mind A Clockwork Orange, and he spares the reader nothing when it comes to bodily fluids or functions as well as an enduring preoccupation with his wiener. Over the course of about a day, the conflicted Jody details past and present exploits with Robbie, who hits Jody and supplies the kids with street-drug-loaded drinks they call supermilk; Midget, who talks only to bugs; and Dag, who is her parents’ only shining hope after her sister was sent to a clinic after a suicide attempt. While the grim circumstances of these kids’ lives are truly heartbreaking, there are darkly comic moments and even a glimmer of hope in the finale; but these elements are weighed down by the book’s sheer amount of squalor, made all the more disturbing because the main characters are children. Will Jody stop Robbie? Will readers overcome their roiling stomachs enough to care?

Whether you love or hate this nihilistic little oddity, you probably won’t forget it.