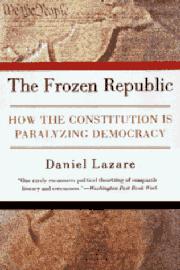 How the Constitution Is Paralyzing Democracy

With breathtaking oversimplification, Lazare, New York editor of In These Times, reduces America's problems to the inefficiencies wrought by its Constitution. Tracing the Constitution from its creation by a group of elitist ``Country gentlemen,'' Lazare argues that it was anything but revolutionary. Indeed, he contends, the Constitution epitomized an antique, deeply conservative Whig tendency that he calls the ``Country'' ideology, which favored a balanced government of limited and narrowly defined powers, commitment to traditional English liberties, decentralization, and rural self-sufficiency. This thinking, discredited by 1787 in rapidly industrializing Britain itself, remained in full flower in post-revolutionary America, Lazare asserts. Plainly, he thinks the creaky constitutional machinery and its checks and balances, designed to protect popular freedom against concentrations of arbitrary power, was excessively cumbersome and pernicious from its inception, and he points out that it has nearly broken down or failed to respond in several national crises, most spectacularly the Civil War. Lazare seems to think our Constitution has never worked well, and he attributes every modern national problem to the obstacles it poses, from judicial review to equal state suffrage in the Senate. Although he denounces the Constitution as an ``antidemocratic'' document, his principal objection seems to be that it produces inefficient, chaotic government. He proposes transforming the House of Representatives into a sort of British Parliament and making it supreme over the Senate, the executive, and the Supreme Court, thereby eliminating the checks and balances he so detests. But instead of making a good case for reform, Lazare takes us on an iffy historical survey, overdoes his argument for constitutional inefficiency, and ends with some pedestrian proposals. A British backbencher would be amused by the suggestion that parliamentary government is efficient and democratic, as would an American by the author's asserting the moral authority of the House of Representatives. (Author tour)