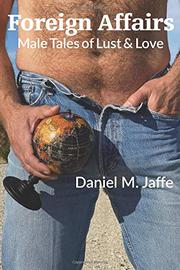 Restless men go abroad in search of sex, love, and belonging in these adventurous short stories.

Jaffe, the author of Yeled Tov (2018), sends his protagonists, most of them gay and Jewish, to unfamiliar places to encounter people and situations that stimulate them carnally and spiritually. In “The Importance of Being Jurassic,” an American reporter in Dublin encounters a closeted Catholic man who regards oral sex as a filthy sacrament, and in “Cobblestone Elegy,” a Jewish American in Prague meets the ghost of a gay Holocaust martyr. A middle-aged Soviet woman, looking for a way to immigrate to the United States, tries to lure a decades-younger American student into marriage in “Innocence Abroad.” In “The Trickster,” an aging man at a convention of “bears and chasers” in Catalonia imagines that all the young, attractive men are lusting for his corpulent body, and a new widower falls in love with a frankly businesslike yet soulful female sex worker in Seville in “El Bochorno.” In the sexually graphic “Walpurgisnacht,” a Catholic soul knocking on heaven’s gate struggles to explain to St. Peter why he engaged in a Satanic sex-murder orgy at a German bathhouse during his last night on earth. Over the course of this book, Jaffe’s lively, limpid prose features sharply etched characters and passages that shift between absurdist humor (as when a character wonders why an old man on a plane “ensconced himself toe-to-head within a 30-gallon, heavy-duty, clear plastic trash bag”), sly social observation (“No matter how many times you wink at him, he will not return your glance, will just take some book out of his bright blue backpack and read—or pretend to”), and wry sensuality. The result is a redolent blend of atmospheric travelogue, earthy physicality, satire, magical realism, and Kafkaesque disorientation—the latter most notably in “The Return,” in which a descendant of Jewish conversos returns to the Spain that his ancestors fled and finds himself bombarded with hallucinatory inducements to take up his deceased relatives’ gentile ways.