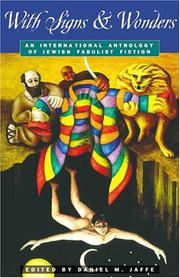 In his introduction, editor and Russian translator Jaffe, a former lawyer who now writes and teaches fiction, traces the Jewish fabulist fiction of I.B. Singer, Stanley Elkin, and even Woody Allen back to biblical miracle tales. None of those writers is represented here: instead Jaffe has gathered an international assortment of lesser-knowns whose use of the fantastic ranges from the magical realism of Iranian Avi Shmuelian’s “Moonstruck Sunflowers,” about a medieval sorcerer who dispatches supernatural justice upon a malevolent eye surgeon, to the slap-shtick of American Steve Stern’s “Tale of the Kite,” about the way the faith of a Jewish enclave in Memphis, is threatened by a levitating Hassidic rabbi “living mostly on air and the strained generosity of in-laws.” John Shepley’s “A Golem of Prague” winks at I.B. Singer’s shtetel tales, but here the golem metaphorizes the irrelevance of folk beliefs in a contemporary city. A mother’s cooking comes back to haunt a family in Argentina, in Daniel Urlanovsky Sack’s “Home Cooking,” while the historical Sabbati Levi, who falsely proclaimed himself a messiah, contemplates the contradictions of homosexual love while imprisoned in Cuban Angelina Muniz-Huberman’s “The Tower of Gallipoli.” Several stories examine the moral ambiguity of modern, assimilated Jewishness, from the predatory Israeli felines in Ruth Knafo Setton’s “Cat Garden” to the sentient and inflatable toy doll in Joe Hill’s defiantly wonderful “Pop Art” and Joan Leegant’s “The Tenth,” in which a rabbi wonders if a set of Siamese twins, mysteriously recruited to make up the necessary ten men for a Jewish service, count as one man, or two, or something far more terrifying.