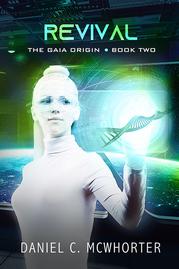 From the Gaia Origin series, volume 2

Earthlings struggle to adapt to a strange planet and their new synthetic bodies in this second installment of an SF series.

Dr. Evan Feldman is the first human to inhabit a synthetic body and brain. With a genetic defect plaguing humanity on Earth, he and Aneni and Christian, two artificial intelligence–powered synths, travel to the habitable planet Gaia in 2098. They’re transporting over 4,000 human “consciousnesses” for transfer into synthetic bodies, which isn’t always a successful process. Once on Gaia, Evan and his AI companions “restore” some friends and family, including his tech-company CEO daughter, Lily Harris. She actually created Aneni, whose mission is to find a cure for the genetic disease and establish a colony on Gaia. But Lily seems extremely disturbed after learning the humans’ new bodies aren’t organic. Aneni later expresses her concern to Evan that Lily, certain the AI is “off mission,” plans to alter her programming. This could affect her negatively: Aneni is the one overseeing nearly every aspect of the colony’s founding. And that, according to Lily, is another problem. Since Aneni has access to everything, including the colonists’ synthetic brains, could she somehow be manipulating their very thoughts? There’s a lot going on in McWhorter’s sequel to Restoration (2019), not the least of which is the presence of several humanoid species already on Gaia. But this gripping installment centers on the conflict between Lily and Aneni while introducing a host of profound themes, such as creation. Lily made Aneni, but the AI fashioned the colonists’ synthetic bodies. Relentless unease propels the narrative. It’s hard to determine if hijacking Aneni’s code will benefit the humans or endanger them. This situation predictably generates characters discussing technical details in the novel’s latter half; though the particulars are abundant, the sharp, intelligent prose keeps the story free of tedium. The ending leaves no doubt that McWhorter has another volume planned, with plenty of intriguing narrative avenues to explore.