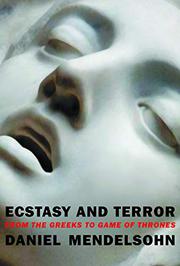 From the Greeks to Game of Thrones

The role of a critic, writes Mendelsohn (Humanities/Bard Coll.; An Odyssey: A Father, a Son, and an Epic, 2017, etc.), is “to educate and edify in an engaging and, preferably, entertaining way.” The author has used his classical training not for rebarbative academic papers but for “getting readers to love and appreciate the works that I myself loved and appreciated.” The pieces in this collection, most of them written for the New Yorker and the New York Review of Books, demonstrate how brilliantly he has succeeded. Some of them focus on the ancient Greek poets and tragedies he loves, such as Sappho and Antigone. Mendelsohn invokes the classics to offer perspectives on modern-day events, as when he compares the Kennedy family curses to Oresteia and its assumption that there is “a connection between the sins of the fathers and the sufferings of the children and their children afterward.” Astute observations populate essays on topics from Brideshead Revisited and Ingmar Bergman films to George R.R. Martin’s A Song of Ice and Fire, which he calls a “remarkable feminist epic.” Readers might challenge some points—e.g., when Mendelsohn writes that Hanya Yanagihara’s novel A Little Life is “about a subject that is too rarely explored in contemporary letters: nonsexual friendship among adult men,” one might cite works by Richard Russo, Denis Johnson, Raymond Carver, and many others. However, Mendelsohn’s points are always passionately argued. He strikes the perfect balance between learned and playful, as when he wonders what 46th-century archaeologists, sifting through the ruins of 21st-century America, will make of building inscriptions such as Condé Nast and Michael Kors or whether the “presence of mysterious symbols—in particular, an apple with a bite taken out of it—will raise the vexed question of whether the site was sacred or secular.”

One fascinating essay after another from one of America’s best critics.