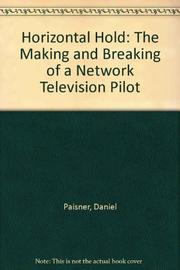 The Making and Breaking of a Network Television Pilot

If a camel is a horse designed by a committee, successful TV shows, on the evidence of the cautionary tale at hand, almost have to be accidents of nature. In 1990, Paisner (The Imperfect Mirror, 1989, etc.) was invited by TV impresario Bruce Paltrow (producer of St. Elsewhere and The White Shadow) to observe the filming of E.O.B., a sitcom Paltrow was producing in N.Y.C. The nascent program, starring Mary Beth Hurt and Rich Hall, focused on the antics of presidential speech-writers. Though a rough pilot was eventually taped, E.O.B. (slated for a six-episode run on the CBS prime-time summer schedule) never made it to the starting gate for reasons both within and beyond the control of its originators—e.g., Iraq's invasion of Kuwait, tardy casting, an uninspired director, script problems, a wildcat strike by technicians. Paltrow (who's married to actress Blythe Danner) and his colleagues tried again in 1991, this time on the West Coast. Despite a fresh cast (including William Daniels and singer Gladys Knight), the born-again project also sank without a trace. Thanks to Paisner, who has made the most of the unlimited access granted him by Paltrow, the abortive project (a collaborative failure if ever there was one) has achieved immortality of sorts here as a show-biz might-have-been. Without patronizing either the program's principals (a serious and dues-paying, albeit laid-back, lot) or the straitlaced networks that have the commercial equivalent of life-and-death powers, the author provides a riveting, revelatory account of the economic, creative, and pop-cultural forces shaping the entertainment fare available on home screens. One of the better inside-appreciations of the chancy, high- stakes game of broadcast TV since Merle Miller's Only You, Dick Daring (1964). (Eight pages of photographs—not seen.)