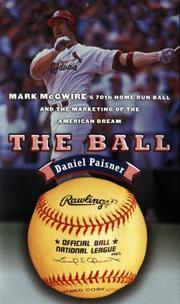 A shocking, funny, and detailed record exposing the excessive market value of collectibles. Paisner (Horizontal Hold:The Making and Breaking of a Network Television Pilot,1992), who has pinch-hit for the likes of Ed Koch, George Pataki, Geraldo, Montel, and Whoopi, here depicts how Mark McGwire’s historic 70th home run ball was manufactured for about five bucks and ultimately sold for over three million. Paisner follows research scientist Phil Ozersky, who caught “the ball,” nearly gave it up (as some kids did with other valuable balls), and nervously held on while a string of agents, auction houses, and bidders led a financial feeding frenzy. Although a fan who understands sports collectibles, Paisner sees the absurdity of throwing around dollars “as if they—d been printed by Milton Bradley, when the market capitalization of fledgling Internet companies rivals the gross national product of, say, Belgium.” We are prepared for Ozersky’s ordeal and triumph when reading of the $93,500 for the Bill Buckner ball (1968 World Series) and the fates of other McGwire and Sosa balls in 1998. Paisner also reveals proposed product tie-ins, including a line of clothes, a credit card hologram of “the ball” and slugger Beanie Babies. It’s madness from the moment Ozersky catches “the ball” and is hustled to an office by Busch Stadium cops past beer-dousing fans. “He’s clutching so tight to the ball, it might hold a secret formula for world peace.” It might hold fortune, as Sotheby’s sold Tyrannosaurus rex bones for $8.6 million, and “stupid money” went for Princess Diana’s wedding gown. An auction at Madison Square Garden gets “the ball” to comic book czar Todd McFarlane. Ozersky gets his million clear, “but his life was no longer his own.” At least Ozersky finally gets to meet McGwire, the hero whose priceless trophy he has sold. A powerful metaphor of how our materialistic greed turns cowhide into a mutimillion-dollar holy grail.