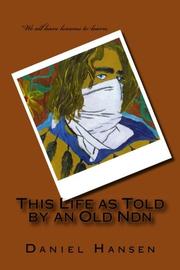 THIS LIFE AS TOLD BY AN OLD NDN

With a beautifully written frame story in the vein of One Thousand and One Nights, The Decameron, and Canterbury Tales, Hansen (Raven’s Spear, 2017, etc.) proves short fiction is a genre in which he shines.

Uncle is a chain-smoking, coffee-swilling, cussing old coot who can weave stories out of smoke rising from an unconscious man. This venerable Native American fashions a series of such tales for a group of children, stitching together the life of Tomtom, the man who lies before him. The Uncle sections are simultaneously humorous, instructive, and world-weary, while the Tomtom stories dance in time, referencing, foreshadowing, and illuminating one another as they construct a biographical and psychological portrait of a mixed-race (Native American and white) young man. The stories range from the Twilight Zone–like “Goat Man,” which mixes teenage ennui with a supernatural hitchhiker, to the laugh-out-loud “The Day I Heard the Bell Ring,” which involves a wild ride on a cooler of beer while slyly alluding to Hansen’s own Tricksters’ War Trilogy. Both the frame (“His words were flecks of gold and smoke that leapt out at the fire before weaving back towards the children’s ears”) and the tales (“they cut away those parts of themselves they do not want. But those parts never go away, hanging from them like dead limbs never to be fully amputated”) are elegantly written and image-filled. Whether Tomtom is wrecking his father’s car and running off to live in a tent or forever swallowing unsaid words of love, each tale abounds with running themes, symbols, and allusions. The ability to see outward from darkness versus the inability to see into darkness, along with the idea of being loved but not wanted, permeates, while the appearances of wasps and butterflies continually portend and color events. The stories Uncle draws out of Tomtom highlight the life of a man in turmoil and just might bring him peace.

Smart, funny, heady, thoughtful, literary; this collection can be enjoyed on many levels by many different kinds of people.