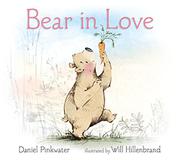 by Daniel Pinkwater & illustrated by Will Hillenbrand

A friendly little whodunit results in an unexpected romance between a bear and a bunny.

Bear lives in “a little cave, just big enough for him,” but it turns out that he has room for companionship. One morning he comes across a carrot lying on a flat rock, and not sure what it is, the bear decides to take a nibble. Delighted, he walks through the woods singing a song evocative of Winnie-the-Pooh’s hums. Two carrots appear the next day, and Bear begins to wonder who has left them. “Crunchy things! Three of them!” he exclaims on day three, and then he finds a whole pile of carrots on the fourth day. “Someone must like me to leave these good things,” he muses, and then he stumbles across a honey tree and decides to bring a piece of honeycomb for his secret admirer. This act of reciprocity instigates an ongoing gift exchange, culminating when the bear finds a bunny hiding in a bush. Mutual admiration overflows as the no-longer-secret admirers offer appreciation for the gifts they exchanged and then join in song at book’s end. While the story is awfully sweet, Hillenbrand’s mixed-media illustrations are what distinguish this picture book. Faintly rendered backgrounds offset characters and foreground settings, lending a truly fresh look to the compositions.