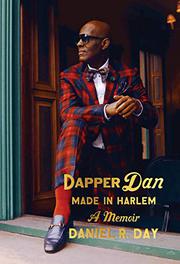 Made in Harlem: A Memoir

After nearly three decades of shaping much of what we know of as “street style,” Harlem-born Day, aka Dapper Dan, tells his life story in an engaging prose style.

From growing up hungry in the 1940s and ’50s (“nothing makes you question the purpose and meaning of life like hunger”) to being a master dice gambler to opening (and subsequently closing) his own clothing boutique, the author chronicles his own story as well as that of the changing societal landscape of Harlem. Day’s parents had moved from “tight-knit rural communities in the South where everyone knew each other” to black Harlem, where families “did their best to re-create those communities.” There was little crime and decent education in the public schools, but as Day grew older, the allure of the streets became more important than an education. The author quit high school as the neighborhood was becoming increasingly violent and fragmented due to new housing projects and the rise of heroin and crack, and he took up gambling as his primary hustle. He became a master of his trade, “somewhere between a magician and a scientist,” and he used his smarts through dice games as a primary means of income to support his growing family. After a brief stint in prison for a credit-card fraud scheme in Aruba, Day, increasingly spiritually minded and determined to get off the streets, returned to Harlem and opened the clothing boutique Dapper Dan, specializing in furs and leathers. “Fashion for me wasn’t about expression,” he writes. “Fashion was about power,” a message that resonated with his neighborhood connections, drawing in the hustlers with money to spend. Day eventually found a creative way to screen print the logos of high-fashion labels, such as Louis Vuitton, Gucci, and Fendi, and make custom clothing for his first customers—the black gangsters of Harlem. Since then, his clothes and vision have become iconic to American hip-hop culture. With clients like Jam Master Jay, Flavor Flav, and Beyoncé, Day continues to have an instrumental effect on black urban culture.

A dynamic version of the mythic American dream.