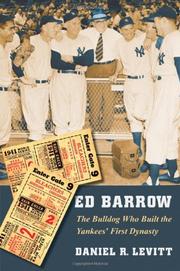 The Bulldog Who Built the Yankees’ First Dynasty

Everything you need to know—and much, much more—about a baseball magnate you probably didn’t know existed.

Born in 1868, Edward Grant Barrow was one of the sport’s original renaissance men. He began his professional career in 1903 as manager of the Detroit Tigers, but didn’t gain any serious notoriety until he led the Boston Red Sox to a championship in 1918. Excellent on-field tactician though he was, Barrow is best known for his 1920-45 stint as the New York Yankees’s head front-office honcho. During his tenure, he not only put together the minor-league system but helped the Yankees become a dynasty for decades with his brilliant personnel moves, acquiring and/or nurturing Babe Ruth, Lou Gehrig and Joe DiMaggio, among many others. Baseball insiders were appreciative of Barrow’s impact on the game—he was elected into the Hall of Fame only eight years after the conclusion of his career with the Yankees—but the average fan wasn’t necessarily aware of his existence, which is still the case today. Does Barrow’s role in baseball history merit a nearly 500-page exhumation? Levitt (coauthor, Paths to Glory: How Great Baseball Teams Got That Way, 2003) would certainly answer in the affirmative. A baseball geek writing for baseball geeks—and that is meant in the kindest, most respectful way—the author has an astounding facility with detail: The sheer number of names, dates and salaries he tosses around is mind-blowing, and the 18 informational tables in the appendix are worthy of inclusion in an economics textbook. The primary drawback here is that Barrow is ultimately a footnote, albeit one of the most important footnotes, in baseball history.

A labor of love of great value to Yankees fans and hard-core baseball junkies, but not too many others.