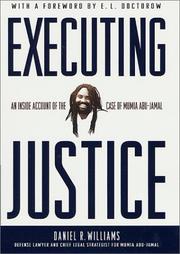 An Inside Account of the Case of Mumia Abu-Jamal

An insider’s account of one of the most controversial legal proceedings in modern American history.

Just before 4:00 a.m. on the morning of December 9, 1981, Philadelphia police officer Daniel Faulkner was shot and killed after having made a traffic stop. When other officers arrived on the scene, they found the well-known radical African-American journalist Mumia Abu-Jamal sitting on a curb next to the apparent murder weapon. Although he denied the crime, Mumia was brought to trial and convicted. His attorneys appealed, arguing that the first trial did not consider key evidence that would have proved his innocence. That appeal was unsuccessful, and Mumia has lived on Death Row for the past 18 years. First-time author Williams, a gifted writer and chronicler as well as an evidently capable attorney, joined Mumia’s defense team a decade ago and has since led the effort to secure his client a retrial. The basis for that demand is multifaceted, and Williams explores each reason in considerable but never tedious detail. He asserts, for instance, that the lack of pathology reports in the original trial compromised Mumia’s defense, and that the government’s witnesses were a dodgy and eminently impeachable lot (one eyewitness, for example, was a prostitute who may have escaped arrest by testifying as police investigators wanted her to). More than arguing for Mumia’s innocence against what he admits is strong evidence to the contrary (and even dismissing as absurd some arguments as to why Mumia could not have committed the crime), Williams considers the trial in the light of a long history of injustices against African-Americans in Philadelphia, and especially against those African-Americans who, like Mumia, have publicly denounced police and judicial corruption. The trial, he concludes, points to the profound divisions along lines of race and class that trouble American society—and to the selective nature of justice that obtains here.

A readable and highly provocative addition to a furious debate.