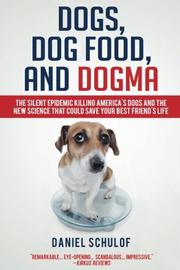 Schulof, whose recreational participation in endurance sports attuned him to body fat’s impact on athletic performance, wondered how he could keep his own dog fit and healthy. His research revealed that “at least half of the dogs in America today are overweight,” which led him on a quest to determine how best to fight canine obesity. This rather remarkable study veers from Schulof’s personal experiences into a weighty scientific treatise about obesity—to some extent, both human and canine. The author approaches the challenge much like an investigative journalist. He does exhaustive research that examines the ancient connection between dogs and wolves, digs into the similarities and differences between human and canine obesity, explores the role of carbohydrates in human and canine diets, and uncovers the seemingly sinister influence of giants in the pet-food industry. Schulof’s keen observation that there is virtually no obesity in wolves while domestic dogs suffer from it is just the tip of the iceberg; the real revelation is that wolves consume a high-quality natural meat diet while most dogs are fed a regimen high in carbohydrates by their owners. The author discovers that the science of canine obesity tracks closely with that of human corpulence; the latest research suggests that carbs, not fat, are to blame: “The most glaring finding that emerges from the literature on canine metabolism is the same one that comes out of studies conducted on human subjects: drastically reducing carbohydrate intake, or eliminating carbs altogether, brings blood sugar and insulin levels crashing back down to earth.” The second half of this strong book is perhaps more eye-opening and potentially scandalous, as Schulof exposes the carb-focused leanings of the pet-food industry, which, in a nod to big pharma, he labels “Big Kibble.” Even the nebulous nature of pet-food labeling is suspect. Quite a bit of this work is technical and scientific but nonetheless intriguing and current. Exhaustive notes and an extensive bibliography make the book all the more impressive.