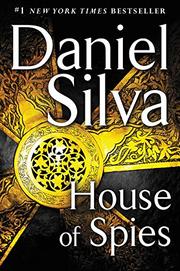 Gabriel Allon is back in the field.

Well, that didn’t take long. By the end of Black Widow (2016), spy Gabriel Allon had finally agreed to become chief of Israel’s intelligence services. All it takes is a terrorist attack on London’s West End—and a whisper that Allon’s current nemesis was the mastermind behind it—to get this storied spy out from behind his desk and back into the thick of it. As they track the man known only as Saladin, Allon and his team travel from Britain to Saint-Tropez and Morocco. They enlist the grudging assistance of a glamorous French entrepreneur (who is in reality a drug smuggler) and his partner, a beautiful onetime model. And they discover the Islamic State has plans that go beyond suicide bombers and vehicular homicide. As usual, Silva has crafted a story that feels ripped from the headlines—possibly tomorrow’s headlines. His characters are confronting an Islamic State that is redefining itself as a virtual entity as it loses physical territory. They’re also fighting against an organization that is shifting its focus from building a caliphate in the Middle East to inflicting casualties in Europe and the United States. This is a less psychologically intense novel than Black Widow, and fans drawn to this series by Gabriel’s sideline as a restorer of Old Master paintings might miss the art history. But this is still a riveting thriller, and Silva’s writing has lost none of its elegance. He provides readers with just enough real-world geopolitics to make sense of his narrative, and his depictions of the different styles of the world’s diverse intelligence services is fascinating as always. What’s different in this installment is the sense that the role of the United States is diminishing in the world. Even though the U.S. asserts itself into the search for Saladin, there’s a clear sense among the British, the French, and the Israelis that their American counterparts are no longer reliable allies.

Another chilling glimpse inside global terror networks from a gifted storyteller.