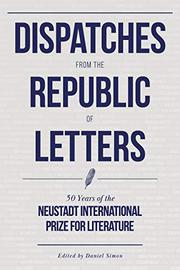 DISPATCHES FROM THE REPUBLIC OF LETTERS

50 Years of the Neustadt International Prize for Literature

Speeches and writings by the winners of a literary prize that should be more widely known.

Norman, Oklahoma, though the site of the state’s premier university, is an unlikely center for writing from around the globe. In the words of the executive editor of World Literature Today, it “does not obviously have a cosmopolitan culture that can sponsor the celebration of world literature and internationalism.” Nonetheless, for 50 years, the journal has been a primary vehicle for delivering works by international authors to American readers as well as the awarding of the annual Neustadt Prize, named for a family of donors. The first honoree was the Italian poet Giuseppe Ungaretti, who accepted with gracious words: “I am very moved by this ceremony in this distant land. It was exhausting to get here: it was far away, it was farther than I ever would have imagined” and yet emanated from a university that was “a model for encouraging studies, but also for the diffusion of poetry.” Other honorees have included Gabriel García Márquez, Elizabeth Bishop, Tomas Tranströmer, David Malouf, Claribel Alegría, and Dubravka Ugrešić, with obvious attention to a diverse body of writers from many traditions and ethnicities. Many of those writers have faced political repression at home. As the editor notes, for instance, “in 1991, when war broke out in the former Yugoslavia, Ugrešić took a firm antiwar stance and became a target for nationalist journalists, politicians, and fellow writers. Subjected to ostracism and persistent media harassment, she left Croatia in 1993.” In her warm, wide-ranging acceptance speech, she recalls Vladimir Nabokov, who remarked, “There are three points of view from which a writer can be considered: he may be considered as a storyteller, as a teacher, and as an enchanter. A major writer combines all three—storyteller, teacher, enchanter—but it is the enchanter in him that predominates.” The enchanters gathered in this volume all merit our attention.

A welcome anthology for readers of world letters.