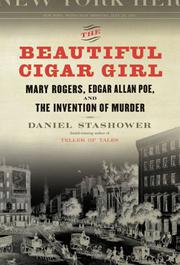 Mary Rogers, Edgar Allan Poe, and the Invention of Murder

An informative, swift-moving account of how Edgar Allan Poe transformed a sensational 1841 New York City murder into “The Mystery of Marie Roget” (published in three installments in the winter of 1842–3).

Stashower knows murder, and he knows the craft of biography. He has written mystery novels (Elephants in the Distance, 1989) and an Edgar-winning life of Arthur Conan Doyle (Teller of Tales, 1999) and brings to this current, complex task both considerable intelligence and wide-ranging research (he scoured Poe scholarship, 19th-century newspapers and Poe’s letters and fiction). For a while, chapters alternate between the murder investigation and the life of Poe. But eventually, the two converge. Mary Rogers, by universal assent, was a beautiful young woman who worked in a cigar shop. Men—not all of them smokers—flocked to the store. But Mary’s life was not untroubled. In 1838, she wrote a suicide note, disappeared, then returned to work. She had at least two serious suitors (both would soon be murder suspects). On a summer Sunday, she left home, supposedly to visit her aunt and attend church. A few days later, her body was found floating in the surf. The initial examination revealed signs of rape and strangulation. Local newspapers—both Horace Greeley and James Gordon Bennett were involved—fanned the flames of the investigation, printing ever more lurid speculations. Some men were arrested, but all were eventually released. And the case gradually fell from the front pages. Enter struggling writer E.A. Poe, who had already written his first detective story, “The Murders in the Rue Morgue,” and believed his fictional detective, C. Auguste Dupin, could solve the Rogers case. Poe had published two installments of “Roget” when alarming new evidence suggested that Mary had died during an abortion. Poe had to modify his final installment.

A bold attempt to understand a tormented genius, to examine a grisly crime and to explain the latter’s effects both on Gotham’s system of law enforcement and on abortion legislation.