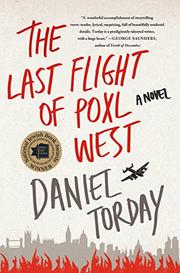 THE LAST FLIGHT OF POXL WEST

While Torday (The Sensualist: A Novella, 2012) is more likely to be compared to Philip Roth or Michael Chabon than Gillian Flynn, his debut novel has two big things in common with Gone Girl—it's a story told in two voices, and it's almost impossible to discuss without revealing spoilers. The reversal that defines this novel arrives late and changes the meaning of everything that's come before, but that's all you'll hear about it here. One of the two narrators is Elijah Goldstein, a 15-year-old student in Boston, who begins his tale, promisingly, like this: "Before halftime on Super Bowl Sunday, January 1986, my uncle Poxl came over. He was just months from reaching the height of his fame, and unaware that the game was being played." This fame results from publication of Skylock: The Memoir of a Jewish RAF Bomber, which Uncle Poxl has read aloud to Eli in manuscript over sundaes at Cabot's after outings to the opera and the symphony. The entire text of Skylock appears here as a book within a book. Poxl's memoir opens with his childhood in Czechoslovakia, where he's the son of a wealthy leather-factory owner and a bohemian mother who poses nude for Egon Schiele. When the Anschluss begins, his parents send him to Rotterdam, where he falls hard for a prostitute. His next move takes him to London, where he joins the war effort and ultimately flies a bomber in a firefight over Hamburg. After each section of the memoir, Eli returns to fill us in on reviews in the Times and the Economist, the book signings and the things we will not be discussing in this review.