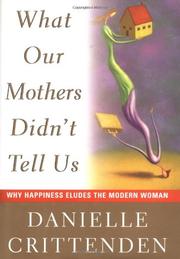 WHAT OUR MOTHERS DIDN'T TELL US

Why Happiness Eludes the Modern Woman

Another attempt to solve contemporary women’s troubling conflicts about the need to stay home with the kids vs. the option of juggling job, home, and children. Crittenden is the 35-year-old founder of a Washington, D.C.—based periodical, the Women’s Quarterly; she’s also married and the mother of two young children. Women today, she claims, are going about it wrong: They—re starting careers and postponing marriage and childbearing until an age where their choice of partners is limited. If a woman waits to mate until she is past 30, then her pool of available men will be filled with “misfits and crazies”—or she’s likely to get stuck in an existing stalled relationship. Crittenden blames the feminist movement, in part, for promoting female self-absorption and obsession with independence. Her solution: Marry young, stay home with the children until they start school, and then launch a career. Why should the mother stay home instead of the father? Because women want to, argues the author, citing the results of various polls, as well as anecdotal material describing the “guilty tension that is felt by every working mother.” Crittenden also (mistakenly) blames feminists for elevating the value of work outside the home over work inside it. In fact, that prejudice existed long before the 1970s feminist movement began; actually, feminism attempted to critically address it. Crittenden writes persuasively about the rewards of long-term marriage and the complications of sexual freedom but seems less sensitive to issues of women aging, describing the post-45 period as the time when a woman’s “body finally fails her” and she becomes “less seductive.” Older mothers, she adds, are less capable of chasing toddlers in the playground. Balancing parenting, a spouse, and a career in our complex society requires skill, confidence, and maturity. Trolling for a husband at age 22 just because that’s when the pond is thick with fins—as Crittenden recommends’seems a regressive alternative.