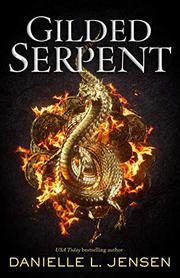 From the Dark Shores series, volume 3

The parallel storylines of Dark Shores (2019) and Dark Skies (2020) continue in this sequel that ties the two together.

Teriana, Marcus, Killian, and Lydia return as point-of-view characters in interwoven stories. Thematically uniting the protagonists is the idea of struggling against conflicting loyalties. Teriana and Marcus struggle with trust, both in terms of being able to trust each other, as they are technically enemies, and individually. Teriana is torn between protecting her people, held hostage by the Empire, or keeping the Empire from spreading into the West; Marcus longs for freedom from the Empire even as his loyalty to the men of his legion is challenged by his knowledge that there’s a traitor among them. Killian feels guilty over the choice he made between Lydia and Malahi, whose father is an inferior ruler, while Lydia’s struggles sneak up on her. The multiple storylines spread the characters to distant corners, presenting new worldbuilding opportunities. The balance between characters allows for a sense of time and travel while characters are on the move, with quicker check-ins preventing the pace from getting bogged down in between devastating revelations, deadly action, intrigue, and, of course, romance culminating in steamy scenes. The characters’ storylines resolve their immediate dilemmas while presenting new dangers for the next installment. Both the East and West feature casual diversity—skin tones (ranging from fair-skinned Lydia to black-skinned Teriana) are sometimes geographically linked but generally lack significance.

Sprawling yet intricate and completely engrossing.