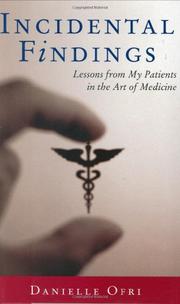 Lessons from My Patients in the Art of Medicine

A second collection of perceptive essays about Ofri’s continuing growth as physician, fulfilling the promise of Singular Intimacies (2003).

Now an attending physician at Bellevue, the author found that her journey to becoming a healer was filled with lessons learned from patients. After completing her residency in internal medicine at Bellevue, Ofri traveled in Mexico, studied Spanish, and worked in small-town hospitals. Her patients included an old man on Florida’s Gulf Coast with no will to live, a young woman in New England needing a hard-to-get abortion, and an impassive Navajo woman in New Mexico whose untreated acne troubled her more than the violence in her life; their cases reminded the author of the limits of her medical skills. On her return to Bellevue, her time was divided between the medical clinic, where she often followed patients for months or even years, and four-week-long stints on the medical wards, where her time with patients was intense but often cut off before their full stories could be known. Among the characters she chooses to profile here are a crotchety old man whose disposition improved when she bought him painting supplies and reading glasses, a disconnected adolescent whose outlook on life changed when she coached him for his SAT, a disturbed woman who faked symptoms to get medical care, and a depressed patient who refused needed treatment. In writing their stories, she is writing her own, Ofri asserts: “In a jungle, they say, you often can’t tell which root system connects to which leaves.” One of the most valuable lessons a doctor can learn, the author believes, is what it feels like to be a patient. Her prologue reveals just how disconcerting that experience is when she finds herself shaken and sore after amniocentesis and a sonogram; a later chapter describes the humiliation and helplessness she felt both during and after giving birth.

A pleasure to read, thanks to the author’s ability to see her patients as individuals and to form a genuine connection with them.