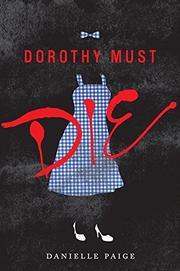 When a cyclone deposits a 21st-century Kansas teen in Oz, she and readers discover there’ve been some changes made.

Dirt-poor “Salvation Amy” Gumm lives in a trailer park, effectively parenting her alcoholic mom (her dad ran off years ago), who seems to care more about her pet rat, Star, than her daughter. That doesn’t mean Amy is eager to be in Oz, particularly this Oz. Tyrannized by a megalomaniacal Dorothy and mined of its magic, it’s a dystopian distortion of the paradise Baum and MGM depicted. In short order, Amy breaks the wholly capricious laws and is thrown into a cell in the Emerald City with only Star for company. There, she’s visited first by the mysterious but sympathetic Pete and then by the witch Mombi, who breaks her out and takes her to the Revolutionary Order of the Wicked (among whom is the very hot Nox). Amy may well be the salvation of Oz—only someone from the Other Place can take Dorothy down. Paige has clearly had the time of her life with this reboot, taking a dystopian-romance template and laying it over Oz. Readers of Baum’s books will take special delight in seeing new twists on the old characters, and they will greet the surprise climactic turnabout with the smugness of insiders.

In the end, it’s just another violent dystopian series opener for all its yellow-brick veneer, but it’s a whole lot more fun than many of its ilk.