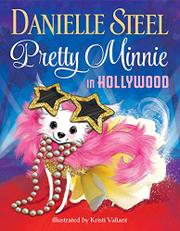 A white French girl named Françoise takes her tiny dog along when she accompanies her fashion-designer mother to Hollywood to work on a movie in this second series outing (Pretty Minnie in Paris, 2014).

Minnie is a pampered teacup Chihuahua who enjoys an opulent lifestyle with Françoise and her mother in their Paris apartment that has a view of the Eiffel Tower. They pack matching outfits for their trip, fly together on the plane (with the dog in her own seat), and enjoy first-class accommodations and sightseeing in Hollywood. Françoise and Minnie visit the movie set, where they meet a snarly pink poodle with a starring role in the film. The poodle acts up and is conveniently fired, so Minnie gets her part in the movie. The slight plot by bestselling author Steel is told in polished but predictable prose, with a perky, sparkly tone matched by the jewel-toned, oversized illustrations. Valiant’s detailed illustrations give Minnie an engaging personality that’s hard to resist, and young readers will enjoy Minnie’s tiny costumes and fancy accessories. The hotel staff and cast and crew of the movie include people of different ethnicities, including the film’s African-American director.

Fluffy and shallow but sweet, with an exuberant effect, from the sparking glitter on the cover to the cast party with “Pupcake Cupcakes” at the end.