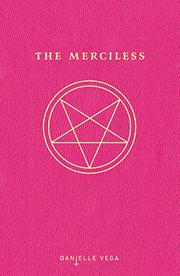 From the Merciless series, volume 1

Mean Girls with an occult twist.

Military kid Sofia Flores is used to moving around and always being on the outside, so she’s happy to be embraced by the queen bees in her new high school in tiny Friend, Mississippi. She is a little sorry that Riley and her posse seem to have it in for friendly Brooklyn, but she goes along with them. Though she’s been raised an unbeliever, her beloved grandmother, who lives with Sofia and her mom, is a devout Catholic; something in her responds when Riley decides to “save” her, baptizing her in the girls’ room. What she sees at a party sets off a horrific series of events that ends with maimed and dead teenagers. The bulk of the book takes place in a secret hideout in an abandoned development, and it is there that the girls viciously, bloodily confront Brooklyn, the proceedings causing Sofia to question all her moral certainties (and her immediate survival). The book comes with a “for mature audiences only” label, and refreshingly, this is not a warning about sex but about protracted, unrelenting and graphically described violence. Vega works in the occult element coyly, giving readers and Sofia only glimpses of what may or may not be supernatural evil—but there’s plenty of lovingly described, human-inflicted evil to keep strong-stomached readers occupied.

It’ll take a sturdy reader not to keep flinching—or put this exercise in sensation down altogether.