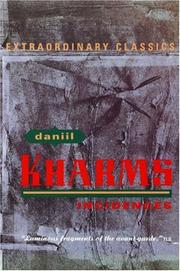 Gaunt vignettes, stories, scenarios, plays, and any other scrap of writing, however small, by a Soviet writer who was killed by the Stalinist regime. Cornwell's brief introduction heralds the Russian pseudonymously known as Daniil Kharms, a member in the 1920s of the left-wing literary avant-garde group OBERIU, which embraced absurd, existential, and experimental writing. As Stalinist intolerance rose, Kharms was declared subversive and allowed to publish only books for children; later he was denied publication altogether. He continued writing, enduring periods of persecution, poverty, and starvation before his 1942 death in a prison hospital. His body of work is scant and all the pieces short: Most are no more than a page or two; ``The Old Woman,'' his masterpiece, runs on for 29. Kharms takes as his subject matter everyday events, depicting them with absurd twists that lend political resonance. Carpenters, writers, families, and historical characters (Pushkin, Gogol, Michelangelo) survive the bizarre and often violent monkey wrenches thrown their way. More often than not, these ``incidences'' are fables that capture a national climate characterized by violence, alienation, deprivation, and disorder—the physical and mental realities, perhaps, of the author as well. The pieces' brevity often makes the book's pace bumpy and unsatisfying; these bare bones could use a little meat. The author's success in expressing himself within a wide range of genres and styles, however, is a triumph of observation and control, although the dramatic work ``Yelizaveta Bam'' demonstrates that this changeability can be as much of a chore for the general reader as it is a feast for the stylistic scholar. Nonfiction here is dull; Kharms's bluntness leaves no room for inference, and his letters, theories, and autobiographical sketches lack the bleak but compelling details of daily Russian life found in his creative writing. An anorexic though not anemic collection that can be fully appreciated only with knowledge of the author's biography.