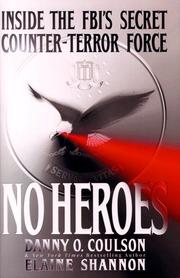 Inside the FBI's Secret Counter-Terror Force

A memoir-cum-how-to-manual for the aspiring Dirty Harry of the family. Coulson, a retired FBI agent who founded the bureau’s Hostage Rescue Team, has little patience for soft courts and slimy lawyers. “My territory,” he writes, “was full of decent, hard-working folks whose rights were being denied, not by an oppressive government, as the Founding Fathers anticipated, but by criminals like that scum-sucking crack dealer we’d just busted.” The territory, it develops in his narrative, was also full of right-wing militia crazies and Middle Eastern bombers, who kept Coulson hopping—and hopping mad—throughout his career. To counter such illicit types, Coulson and his colleagues in the FBI’s special-weapons and tactics unit adopted an unpleasant but effective philosophy: “scare the shit out of them, and they’ll give up.” Coulson reserves a special disdain for paramilitary groups like the Montana Freemen, the Order, and the CSA (or Convenant, Sword and Arm of the Lord), groups responsible for hate crimes across the country. A good-guy player in some of the most newsworthy crimes of the last few decades, Coulson takes us inside events like the shootouts at Ruby Ridge and Waco, the “Dog Day Afternoon” bank robbery, and the World Trade Center and Oklahoma City bombings. Without apparent irony, he relates how the FBI got into the SWAT-team business in the first place: because federal law prohibits the use of the military in domestic affairs without specific presidential order, police forces throughout the nation have militarized. Coulson examines where these forces have performed poorly, such as at Waco, and where they have performed well, such as in the aftermath of the Oklahoma City bombing. Despite the assistance of Time correspondent Shannon, Coulson’s prose is clichÇ-ridden and self-important, but the stories he has to tell offer an unusual inside look at how the FBI works. (16 pages b&w photos) (Author tour)