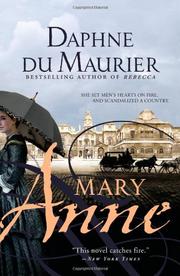 A novel, quite openly based on actual historical records relating to Miss du Maurier's great, great grandmother, Mary Anne Clarke. It is made to order material for a colorful period novel, a sort of feminine "rake's progress", in which the reader's sympathies are patently enlisted on the side of Mary Anne despite her record. From an insecure slum childhood, when she had to trick her elders in order to obtain a bare pittance for family survival, Mary Anne knew that she must aim high, never allow sentiment to interfere, and still what might be called her conscience. Her teenage marriage to a four flusher and drunkard served to reenforce her determination, and for one man only did she allow a flicker of emotion to sway her, now and again. She became the mistress of the Duke of York — and he never quite got over her, though he discarded her when her drunken sot of a husband threatened exposure, and though she dragged him through the mud of an investigation. The other men in her train were mere time servers, useful in the upward climb — and some of them turned on her when her star was getting. But somehow she never lost her gallantry, her poise, and the thing each of the men important to her life remembered was her smile. She died-after those who mattered had gone, an exile from the England she loved. But her story read today brings to light a period in England's history when society was ridden by pretense and connivance, when services and preferments were bought and sold, when reputations rose and fell. Daphne du Maurier is a vivid story teller; she has spun this tale a bit beyond its holding power, but she has drawn a memorable figure. Not top drawer du Maurier, but a sure best seller.