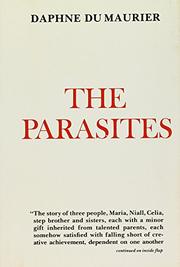 Quite different — and somehow more personal- than Daphne du Maurier's other novels. It is an odd pattern — in the story of three people, Maria, Niall, Celia, step brother and sisters, each with a minor gift inherited from talented parents, each somehow satisfied with falling short of creative achievement, dependent on one another (particularly Maria and Niall) and shutting out close relations with the rest of their world. The story opens on the Sunday in the country when Charles, Maria's husband, calls them all "parasites" — leaves them to recall the past in varying terms, and ends the day by asking Maria for a divorce. Bit by bit, the pieces fall into place. The father, selfish, possessive, magnetic, a singer who outlives his gift, and keeps his youngest, Celia, in thrall. The mother, killed in an odd accident, just as she realizes that her dancing days are ending. Maria, popular actress, finding in the theatre full mead for a life which finds children a nuisance, and Niall a better companion than her husband. Niall, popular song writer, and knowing his limitations — needing Maria, but unwilling to give all to her. And Celia, spinster, whose stories and drawings might have brought her fame had she taken time out from service to others. And the end? For all but Niall, the familiar roles — feeding on the demands of their worlds. Drama played out against a background of London — of a country house- of the world of theatre. Skilled craftsmanship, but not so holding a story as Rebecca.