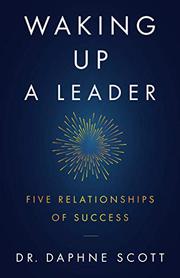 WAKING UP A LEADER

A debut self-help book that aims to provide a deeper understanding of the origins of effective leadership.

Despite finding considerable success as a physical therapist and executive coach, Scott says that she was miserable by the time she turned 30—exhausted, stressed, and with almost no personal life. She began practicing meditation and mindfulness, and she reached an epiphany that changed her life—that although her problem was within herself, so was the solution. She walked away from a $2 million-per-year job, started her own company (DS Leadership Life), and embarked on a lifelong “awakening,” which she says that anyone can have. The key to becoming an upbeat and effective leader, she says, is mindfully approaching one’s five key relationships—with time, money, one’s identity, one’s friends, and the unknown. This idea distinguishes the book from standard business how-to guides, which mostly focus on marketing, hiring decisions, and the like. Instead, the author stresses the inner state of a leader and how one can use it to help create a cohesive team without “toxic” elements. In three parts, the book addresses ingredients for success, the five aforementioned relationships, and leadership-development culture. Each part could make for an effective book of its own. One innovative theme is that a leader must overcome fear and replace it with trust—a heavy but critically important assignment. She spells out exactly how to approach this task through advice, exercises, and maxims from other experts. Her breezy writing style and bare-bones honesty about her own rocky start (“I created a big mess and disappointed a lot of people”) will instill confidence and make readers feel as if they’re having a conversation with a wise friend or mentor.

A useful guide for managers who are struggling to create a cohesive team.