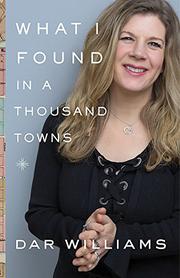 WHAT I FOUND IN A THOUSAND TOWNS

A Traveling Musician's Guide to Rebuilding America's Communities: One Coffee Shop, Dog Run, and Open-Mike Night at a Time

The singer/songwriter builds on her decades as a touring performer to offer bracing examples of small cities that have found ways to thrive.

In a series of chapters about specific locales, William (Lights, Camera, Amalee, 2006, etc.) is both descriptive and prescriptive. She bolsters her keen sense of observation with interviews of local reformers and occasional forays into urban planning theories. In addition, the author synthesizes what she has observed and heard to provide specific, practical suggestions about how struggling towns can seek improvements. In the first of the book’s three sections, Williams focuses on outdoor spaces that have been converted to a new use, such as a barren hillside turned into a sledding park, and on spaces created by nature that require no radical transformation. Although she mentions numerous cities where she has resided and/or performed, the first section focuses most thoroughly on Beacon, New York; Moab, Utah; and Wilmington, Delaware. In the second section of the book, Williams elaborates on how to build healthy small cities through emphasizing historic factors (Phoenixville, Pennsylvania), cultural factors (Carrboro, North Carolina), and local food (the Finger Lakes region of New York). In the final section, primarily about Middletown, Connecticut, and Gainesville, Florida, the author emphasizes the importance of figuring out the core of the local character and spreading the news to residents as well as tourists. The principle connecting all of Williams’ examinations is something she terms “positive proximity,” which begins when city residents who normally live in relative isolation come together to pool their enthusiasms and skills. Williams stresses inclusiveness as part of proximity, giving examples of how residents of all races and backgrounds cooperate for the good of all concerned.

During a time of political, economic, and social upheaval across the United States, Williams’ grounded optimism is a refreshing corrective.