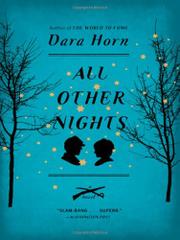 Horn (The World to Come, 2006, etc.) details the adventures of a young Jewish spy for the Union.

In the hours before Passover 1862, 19-year-old Jacob Rappaport emerges from a smuggler’s barrel onto the New Orleans waterfront. The son of a wealthy New York merchant, he joined the Union Army to avoid an arranged marriage and has been sent South to kill his Uncle Harry, suspected (rightly) of planning to assassinate Lincoln. Jacob slips poison into his uncle’s seder wine, and Harry expires spectacularly, vomiting black bile onto the silver trays. Regrettably, this is the most dramatic moment in the novel. Jacob’s next assignment is to infiltrate a Virginia household and marry beautiful Rebel spy Eugenia Levy. Assisted by her three sisters, she’s passing on military secrets blabbed by a Union officer too pompous to realize “that ladies also have brains.” Horn’s Dan Brown–like fascination with codes and passwords is unlikely to be shared by readers, nor is the romance terribly compelling. Jacob falls for Eugenia and succeeds in marrying her, but his ambivalent vacillations between shame and bravado make him a weak hero. Eventually the sisters are arrested and Eugenia is reported dead: more shame for Jacob, who has now betrayed his wife as well as killed his uncle. His mission is over, but the novel is only half finished. Jacob returns to the South as a regular soldier—primarily, one suspects, so Horn can work Grant’s order to expel Jews into the plot. Crippled and partially blinded in an accident, Jacob volunteers for one last mission, which involves gaining the trust of Judah Benjamin, the Jewish brains behind the Confederacy in Richmond. Two big questions remain: Is Eugenia still alive? Will Jacob be a fool for love? Make that three: Does anyone care?