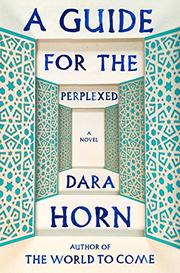 A GUIDE FOR THE PERPLEXED

Horn (All Other Nights, 2009, etc.) is nothing if not ambitious in concocting this stew of Middle East politics, computer sci-fi, Jewish philosophy and romantic melodrama about a Jewish techno-entrepreneur taken hostage in post-Mubarak Egypt.

The wonderful title comes from the 11th-century work by Maimonides rediscovered in the 1890s by Solomon Schechter of Cambridge University, who found pages of Maimonides’ writing in an Egyptian synagogue storeroom called a genizah. Interwoven with a less than effective re-telling of Maimonides and Schechter’s history, Horn’s present-day fiction concerns the beautiful if geeky genius Josie, who borders on autistic in her lack of empathy for others. California-based Josie has invented a software program, not coincidentally called Genizah, which tracks and stores the moments a person is experiencing in order to turn them into a full memory of her/his life. Her company is thriving, and Josie is happily married to handsome Israeli Itamar. She chooses to ignore her 6-year-old daughter Tali’s worrisome emotional quirks, perhaps because her own childhood memories include being an outcast among her doltish peers, including her older sister Judith. Judith’s memories differ from Josie’s—she is haunted by her mother’s favoritism toward Josie and her inescapable role as the lesser sister. Employed by Josie’s company, she is lonely and jealous that everything comes so easily to Josie. Then Josie is kidnapped while consulting with the Library of Alexandria in Egypt. Believing Josie has been killed, Itamar and Tali depend increasingly on Judith, who blossoms into the loving person she always wanted to be. But Josie is not dead. She is busy creating a genizah so her Egyptian captor can recreate the life of his dead son. The philosophical questions raised are intriguing, if faddish: Is God omniscient? What is memory, and can it be trusted? What is the relationship between past and present? What is time dilation? The psychological plot concerning the characters is less captivating, although Judith is a standout.

A work marked by brilliant conceits and clever plotting.