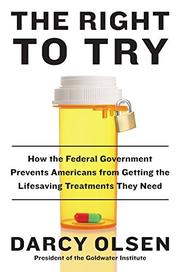 THE RIGHT TO TRY

The president and CEO of the Goldwater Institute makes a convincing case that the slow pace of the Federal Drug Administration's development and approval process for new medications is needlessly costing lives.

Throughout this forceful book, Olsen cites troubling statistics that underscore the depth of what she claims is a worsening problem. “The FDA,” she writes, “takes as long as 15 years to bring a new medicine to market and Americans are now waiting 60 percent longer for the FDA to approve life-saving medical devices—such as stents and valves—than they did just seven years ago.” This is particularly disturbing in the case of patients with serious illnesses who are denied access to promising new treatments. According to the author, one cause of the problem is asymmetry in the approval process. The FDA is incentivized to be overcautious. If someone dies after undergoing a new treatment approved by the agency, there is a scandal; however, there is insufficient attention paid to deaths attributable to delayed approval. “Instead of speeding medical innovation,” writes Olsen, “the FDA is slowing it down—demanding more data, more tests, and more procedures on more subjects before it will approve a drug.” In some cases, of course, more data and more tests are warranted. But though “American patients used to be the first to benefit from their country's enormous investments in basic medical research,” that is no longer the case. The author presents case histories of patients fortunate enough to be enrolled in FDA-approved trials, many of whom experienced remarkable cures. For terminally ill patients, the odds that an experimental drug will help, though as low as 20 percent, may still be attractive. Olsen’s organization is leading a bipartisan campaign to pass Right to Try legislation allowing patients and their doctors to bypass FDA regulations in deciding whether or not to try experimental treatments and for drug companies to make them available on a compassionate basis.