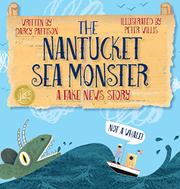 This nonfiction picture book chronicles the events surrounding a fake 1930s news story about a sea monster on Nantucket Island.

In 1937, Nantucket’s Inquirer and Mirror newspaper printed an interview with a man who said he saw a strange ocean creature. More eyewitnesses came forward; gigantic footprints appeared in the sand, and people contacted scientists. A rumor flew that the creature was caught, which turned out to be untrue. Around the country, frightened people read about the Nantucket Sea Monster before the truth was revealed: The “monster” was a 135-foot balloon created for the Macy’s Thanksgiving Day Parade. Everything from the eyewitness statements to the footprints was part of a publicity stunt orchestrated by puppeteer Tony Sarg, and the Inquirer and Mirror admitted to collaboration. Pattison (Road Whiz, 2018, etc.) sticks to the facts, with exact dates of events and dialogue taken directly from actual newspaper articles. However, the wry, playful delivery (“The story was gaining credibility. After all, the newspaper printed the stories, so it had to be true”) keeps things entertaining, brilliantly inviting discussion about hoaxes while remaining kid-appropriate. Back matter includes a glossary and a history of freedom of the press and fake news. Willis’ (Clang!, 2018, etc.) paint-and–mixed-media collage pieces complement the story wonderfully.

A thought-provoking story with timely resonance.