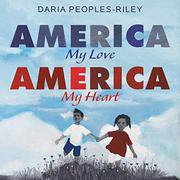 Front and back endpapers picture a United States flag with the Pledge of Allegiance printed in childlike handwriting. Within, gray-toned illustrations with accents of red, blue, and white depict people of color of all ages in outdoor and indoor settings: cities, fields and beaches, churches and schools. The text reads like a poem, narrated by a first-person voice who is, at first, unsure of their inclusion in the bold, brave United States. “Do you love me?” the voice asks its country. A series of questions addressed to “America,” some literal and some figurative, reveal an obsession with and a lack of confidence in the narrator’s relationship with their country, until at last the voice concludes that, despite all these questions, “America, I am you. / America, you are me.” The text incorporates occasional phrases in Louisiana Creole and in Spanish (both without translation), a choice that is explained in the author’s note as a reflection of her heritage. Through simple, poetic language and stark, symbolic imagery, Peoples-Riley delivers another powerful representation of the complex relationship between people of color and the country whose past and present call its love for some of its people into question. This book answers a deep fear about wholeness and belonging as it invites young readers to grow into its message.

A sensitive rendering of the conflict at the core of double consciousness.