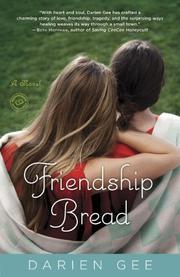 Another addition in the recent trend in popular fiction: Small groups of women improve their lives by engaging in a domestic comfort. This time it's bread making.

Julia and her small daughter Gracie find a gift on their doorstep—a plate of bread, a note and a bag of starter dough. Though Julia is not a baker, and has little interest in...life (more on that later), Gracie convinces her mother to follow the instructions and make Amish Friendship Bread. Part of the requirements are to split the bag of starter into three, bake one loaf for yourself and pass on the rest to someone else—a culinary chain letter. The novel traces the effect of the Friendship Bread on a small town, jumping from neighbor to neighbor, but focuses on a small group of women whose lives need mending. Julia’s son Josh died five years ago, and since then life is a daily struggle and her marriage is a mess; Hannah is soon to be divorced by her husband, a famous classical musician (as she once was before an injury); Madeline is struggling to run her tea shop and come to terms with the kind of stepmother she was; Edie is pregnant and is sure it will ruin her career as an investigative journalist; and, finally, Livvy is also expecting, but her husband has just lost his job, and her sister Julia won’t speak to her—she’s still blamed for Josh’s death. Gee admirably weaves the various lives together, linked more often than not by sadness and disappointment, and demonstrates that simple companionship is a powerful balm. The novel’s title, and even its conceit, promises a kind of homespun sappiness that the narrative thankfully avoids, delivering instead thoughtful portraits of women on the brink of finding better versions of themselves.

A satisfying first novel by Gee; perfect for the book-club circuit and beyond.