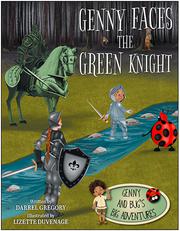 A brave, creative girl battles the legendary Green Knight in this picture book.

Genny, a young Black girl, loves going on pretend adventures. Wherever she goes, Genny always brings her favorite toy, a stuffed ladybug called Bug, as helper and companion. Coyote and Raven, two other toys, often show up and try to wreck things. Journeying in the world of King Arthur and Queen Guinevere, Genny accepts a challenge from the Green Knight. He may be powerful, but “I am powerful, too,” says Genny. A fierce fight ensues, and although Coyote and Raven try to distract her, Genny gets help from a mysterious ally called Phoenix. After the two collaborators win, the Green Knight praises Genny’s valor, and Phoenix gives her a magical amulet that will call him when she needs him. In his book, Gregory tells a charming story that vividly captures the wild magic of imagination. Poetic images enrich the tale, as when Genny gets stronger “like a new sword pulled from the fire is made stronger each time the hammer strikes it.” Dialogue, too, is striking and effective. Duvenage provides somewhat stiffly modeled but varied, well-detailed pictures.

An adventure celebrates imagination and courage with entertaining verve.