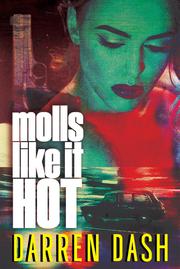 A bored cabbie tempts fate by attaching himself to a gunslinging gangster and his female operative.

Prolific British writer Dash’s (Midsummer’s Bottom, 2018, etc.) latest novel stars Eyrie Brown, a hard-drinking London taxi driver who, while lamenting his dull life, witnesses a shootout between several East End gangsters. One of the bloodied gunmen, Lewis Brue, rushes out of an alley and accepts the cabbie’s swift offer of a ride. Brue counters with an offer of his own to have Brown work covertly for him. As a former British soldier who returned from his enlistment “directionless and penniless,” Brown, abandoning his hopes to become a pro boxer, accepts Brue’s lucrative “business” proposition to do a job for 25,000 pounds. The author deftly paints his protagonist as hardscrabble and desperate for meaning in his life, but also possibly suffering from PTSD as he becomes increasingly reckless. The job appears innocent enough at first, but there’s a catch: “babysit” a young woman named Toni Curtis for a weekend, but “fight or flee” if armed henchmen arrive at his apartment looking for her. It quickly becomes clear to Brown that lewd, cocky Toni isn’t just an average woman needing special protection. Though he employs the kind of physical and tactical talent that kept him alive throughout his stint in the military, he proves no match for the cunning, gun- and knife-toting Toni after he carelessly takes her to a bare-knuckles boxing match and then a bar where trouble boils over, leaving three patrons dead. Panicked relocations only lead to more chaos and Toni’s kidnapping as Brown attempts to return the money and bow out but ends up being the one in the mob’s crosshairs. In this page-turning tale, Dash supplies plenty of rousing action and deadly gangster machinations to satisfy mob-flavored fiction fans. But it’s his knack for creating classic scene-stealing villains with names like Smurf, Spursy, and Rabbit that really deserves the applause. The author is also careful not to let things peter out as his bold protagonist finds a new lease on life. The rousing story’s rescue mission conclusion is as bloody and cinematic as its opening scenes.

A thrilling tale loaded with bullets, bloodshed, and bodies that stars a daring veteran.