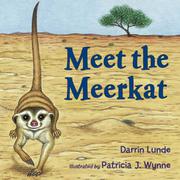 Along the lines of their Hello, Bumblebee Bat (July 2007), Lunde and Wynne again introduce primary readers to a small, fuzzy animal through a very simply written interview: “Hello, little animal. What is your name?” “My name is Little Meerkat. I am a kind of mongoose.” Looking directly at the viewer in Wynne’s cleanly drawn illustrations, or seen scampering about a nearly barren habitat with its burrow-mates, the interviewee describes its appearance, what it eats, sounds it can make and common habits, then at day’s end nestles down in cozy company for the night. Playing up the meerkat’s general cuteness and social nature, this takes a more anthropomorphic approach than Heidi Moore’s A Mob of Meerkats (2004), but may in consequence lend itself better to sharing with groups of children. (Picture book/nonfiction. 5-7)