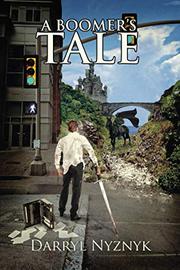 A novel focuses on the adventures of an attorney facing a midlife crisis.

Nyznyk’s (The First Gospel, 2017, etc.) protagonist, Jack Darrow, a 50-something lawyer, is mired in ennui: “Maybe by fifty, the real world has so overwhelmed a man that dreams disappear and hopes for adventure, romance, and excitement fade into the mundane reality of everyday life.” Not even the love of his beautiful wife, Julia, and his family is enough to bring Jack out of his funk. So, in a self-indulgent effort to find himself, he goes on a camping trip with old friend Paul Dickson. Unfortunately, the pair soon runs afoul of a trio of brothers straight out of Deliverance. Running for their lives, Jack and Paul hide in a cave only to have it collapse on them and their pursuers. When Jack awakes in the long-ago land of Estandor, he rescues an attractive woman being pursued by a dark knight. The wounded Jack, now back in his college-age body, is taken in by rebels opposed to the rule of the ruthless Cormac Canhagin, which is enforced by his Black Guard. Figuring that he’s stuck in the past, the protagonist throws in with the rebels seeking to overthrow Cormac, even after Jack gets captured. Meanwhile, in the present, Julia and family adjust to life without Jack. Nyznyk has crafted an effective cautionary tale. Characterization is strong in this enjoyable spin on Outlander in which Jack falls for the beautiful Kara but can’t forget his life with Julia. Likewise, Julia can’t move on from soul mate Jack. Cormac is a venal, entitled nobleman who has crushed the humanity out of his head knight, Silver Glen, known as The Dread to his leader’s downtrodden subjects. The best parts of the smooth-flowing narrative are the Estandor scenes and backstory, which take on the flavor of an Edgar Rice Burroughs pulp novel as man-out-of-his-time Jack rallies the rebels. The modern-day scenes, too many of which center on whether the neighborhood lecher will successfully seduce Julia, aren’t nearly as engrossing. But the tale works because readers will become invested in hoping that the new, improved Jack gets his happy ending.

A time-travel treat with a captivating hero.