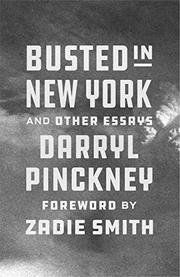 BUSTED IN NEW YORK AND OTHER ESSAYS

Fiercely intelligent essays, reportage, and reviews from the award-winning novelist and nonfiction writer.

In a generous gathering of 25 pieces published since 1995, Pinckney (Black Deutschland, 2016, etc.), who once carried around James Baldwin’s Notes of a Native Son “as if it were a training manual,” examines the African American experience, past and present, from the deeply observant vantage point of a black, gay intellectual. The most compelling pieces illuminate events—e.g., the “shower” of self-help at the Million Man March and tensions on the streets of “sundown town” Ferguson, Missouri, where the author bonded with protesters after the police shooting of Michael Brown. Each is exquisitely detailed, set firmly in history, and filled with personal reflections, unfurling in the beguiling manner of longer pieces in the New York Review of Books, where much of this book first appeared. The title essay describes Pinckney’s arrest for smoking marijuana “in the dark of Sixth Street” in Manhattan. Writing with understanding and skepticism, he examines the centurieslong “surveillance” of black people, Soul on Ice at 50, the black upper class, and the first Obama inaugural in ways that meander pleasingly between distant and highly personal. The lives of his “NAACP faithful” parents are touchstones, as are the careers and works of Langston Hughes, Richard Wright, Ralph Ellison, and Ta-Nehisi Coates, all considered here. The author first traveled to Europe in 1971, at age 17, and returned to live in Berlin for several years in the 1980s to escape America and racism. Of the 2016 election and the resurgence of white supremacy, he writes: “I mind this happening when I am getting too old to run from it. Shit, do not hit the fan.” Other essays tell the story of blacks in Russia, explore the recent revival of Baldwin’s work, and celebrate the art of Aretha Franklin, whose songs remain a soundtrack in Pinckney’s life.

A deeply satisfying, beautifully crafted collection of work by a writer of uncommon excellence and humanity.