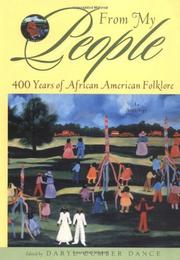 Because the history of black Americans has been largely written from the perspective of white contemporaries, folklore, oral tradition, is our best window into the world African-Americans found themselves in as slaves, and later as second-class citizens. University of Richmond professor and frequent anthologist of African-American culture, Dance (Honey, Hush!: An Anthology of African American Women’s Humor, 1998) here interprets “folklore” in its loosest possible form, and includes—along with the traditional folk stories and songs—sermons, rumors, e-mailed joke lists, recipes, furniture, etc. While clearly a rich resource for, and a powerful introduction to, black American culture, the collection is also vastly entertaining, almost overflowing with centuries of wise, sad, and funny responses to centuries of living in the white man’s world.

Perhaps unavoidably, due to the extent of the material, the volume has an amorphous, scattershot feel, but it remains a valuable and rewarding compendium.