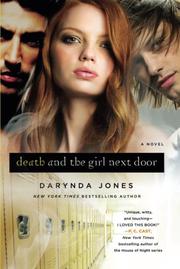 DEATH AND THE GIRL NEXT DOOR

Falling in love with a supernova-level handsome hunk when you’re only a sophomore can cause problems, but when you discover that he’s actually the Angel of Death, you might want to think twice.

Lorelei does well in school until she meets the amazingly gorgeous Jared. She can’t believe he seems attracted to her instead of all the really pretty girls in her small-town New Mexico high school. Meanwhile, she worries about Cameron, another hunky student, who appears to be stalking her. It turns out that Cameron is stalking Jared, however, in an attempt to protect Lorelei. When Jared must make the decision to take Lorelei’s life, he goes rogue. Will his decision get him into trouble in Heaven, and can Cameron contain his rage against Jared? When Lorelei learns that she herself has some paranormal powers, she begins to understand some of the mysteries of her past. However, someone else appears to be stalking Lorelei, and he might menace her even more than the grim reaper. Jones deliberately keeps her tone light, with constant comic banter among the three friends even as battles rage between Jared and Cameron. The light atmosphere clashes somewhat with the overall level of suspense, but readers may not care. She hits plenty of buttons: impossibly handsome boys, supernatural powers, hot romance, friendship, school rivalries, suspense and comedy. The final scene sets up sequels, natch.