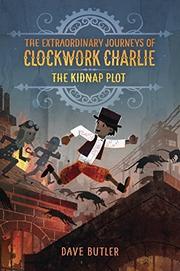 From the Extraordinary Journeys of Clockwork Charlie series, volume 1

Charlie Pondicherry, a Punjabi-English boy whose life revolves around his father’s clock shop, experiences the world entirely through books and stories…but that is about to change.

When his brilliant inventor father is kidnapped by a group of sinister men, all they leave behind is a mysterious note signed by the Anti-Human League. Aided by a motley crew of helpmates that includes a troll, an aristocratic pixie, and two chimney sweeps, Charlie races to save his father and foil a plot against Queen Victoria during her Diamond Jubilee. Along the way, Charlie learns that life is far more complicated than the fairy tales he read could have prepared him for. In this first novel of a projected series for children, Butler crafts a multilayered network of societies within and beneath London and a racially diverse cast of characters, none of whom are entirely what they seem. Through the group’s exploits in the city, the author makes astute social commentary about the xenophobic attitudes of both 19th-century English society and, by extension, our own. Though the fast-paced action is dizzying at times, the novel’s central lesson that kindness is integral to the definition of humanity is solid.

Reminiscent of both Pinocchio and The Great Mouse Detective, this novel is tailor-made for young readers who love adventure narratives and steampunk fiction.