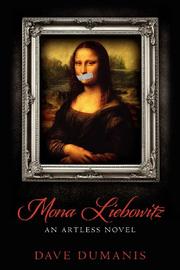 The future Big Split between the Northern and Southern United States leads to religious demagogy and the right-wing political delirium that provides the backdrop for Dumanis’ novel.

Never really wanted by her mother and sexually abused by her father, Mona Liebowitz wants to create an art project that spans the nation, a futile dream in the New American Republic, where art has been decried as a distraction from God and subsequently banned. Painting lands Mona in juvenile hall. In an attempt to assert herself, she composes a mural under the cover of night and gets locked in solitary confinement. While imprisoned, she is granted a wish by a magical “wee person” who ends the conversation by shooting off into oblivion. Then things get weird. Through plot-driven mayhem, Mona finds herself on the lam, disfigured and starting a religion before she meets her ultimate fate. Throughout the book, Dumanis’ strong satirical voice blasts the hypocrisy of those who don’t practice what they preach. Evil deeds, such as Mona being locked in boxlike confines and later being assaulted, all occur at the hands of the self-assured authoritarians, while images of Jesus look on. If the plot and dialogue weren’t enough to grasp the author’s intentions, there are the lists and lists of hybridized nouns: Girl Scouts have become God Scouts. An amusement park is called Godland (complete with David and Goliath fights on the hour and a ride named The Slide to Hell). Then you’ve got your Freedom objects: Freedom Net, Freedom Phone and the satisfyingly oxymoronic Freedom Locks. Although the author’s points are made clearly, they lack the subtle delivery that could send the reader on an actual journey. Instead, hyperbole and breakneck pace reign while the plot vacillates from amusing to sickening and then abruptly ends.

In this dark and bizarre satire, Dumanis proposes a world in which hyperreligious fervor shields and empowers the truly demented while destroying individualism and artistic expression.