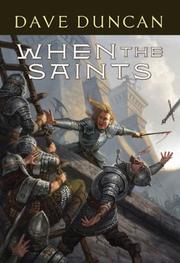 Certain individuals possess a form of magic called Speaking, which involves invoking saints (or according to the Church, demons—even though the Church has its own Speakers) to work miracles. The Magnus clan has loyally served the kings of Jorgary for centuries. However, Cardinal Zdenek, the real ruler of Jorgary—old King Konrad lies dying, while Crown Prince Konrad is an irresponsible rakehell—knows that Duke Wartislaw of Pomerania has invaded Jorgary with an army of Wends. Only the seemingly impregnable Castle Gallant holds the Silver Road against Wartislaw's advance. Unfortunately, Wartislaw has brought with him a monster cannon capable of smashing the castle. The four surviving Magnus brothers, Wulf, Otto, Anton and Vlad, have belatedly been dispatched to Gallant to organize the defenses. Young Wulf is a Speaker, powerful but untrained and ignorant of magic's rules, wracked with doubts as to whether his talents truly emanate from saints or demons. Zdenek arranges for another Speaker, from a mysterious organization known as the Saints, to assist with Wulf's education. But Wulf has other problems: He's desperately in love with countess Madlenka, Anton's wife; and, thanks to his actions in the previous book, the Inquisition is after him—and they are relentless.

An authoritative reworking of history, combining a splendid welter of religious and political intrigues with Duncan's typically inventive, deft handling of magic and character-driven action. After some rather inattentive efforts in the past few years, the author is back in top form.