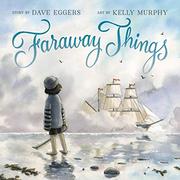 A found “faraway thing” becomes a turning point in the life of a boy.

“Lucian live[s] with his mother on a windswept shore.” His father has been absent from their lighthouse home for long enough that Lucian worries his real memories of him are fading. After a storm, Lucian combs the beach for what his father had called “faraway things”—objects tossed up by the sea—and finds a cutlass. Thrilled, he plays with it, sweeping and slashing the air. The next day dawns foggy, but when it lifts Lucian spies a stranded sailing ship. As he watches, a rowboat is lowered from the ship and moves toward him. The captain steps ashore, wearing a sheath that matches the cutlass. He tells Lucian the cutlass belongs to him, but in trade, the captain will let Lucian select anything from his treasures. Lucian reluctantly realizes the cutlass belongs to the captain and agrees. At the ship, the captain shows Lucian wonderful things and advises him to “choose wisely.” Lucian does. This bildungsroman’s timeless and slightly otherworldly feel is underscored by its illustrations’ muted, effective palette of earth, sea, and sky tones. Unusual perspectives—an ingenious choice for a muted palette—create visual stimulation, showing views from both above and below the horizon line. Satisfyingly, the endpapers allegorically start and finish the story. The captain has dark skin; Lucian and the others have light skin.