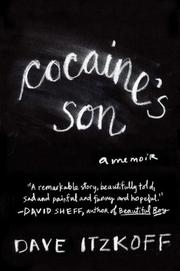 A son's attempt to salvage a relationship with his cocaine-addict father.

New York Times culture reporter Itzkoff (Lads: A Memoir of Manhood, 2004) explores the complications of forgiving a man who may have deserved no second chances. As a boy, the author viewed his father as an ally in the fight against Hebrew School, but he soon realized that these minor heroics did little to make up for his mysterious absences. Though he was unable to discern his father's secret, Itzkoff’s mother revealed the truth: “He's a drug addict, Davey,” she informed him. “He's been addicted to cocaine almost your whole life.” Years passed, though the author continued to struggle to understand his abnormal familial circumstances. While in college, Itzkoff paid a rare visit to his father's office and saw a display of family photos that he deemed incapable of telling the “complete story of a family.” The author’s memoir picks up where the “profoundly untrue” display left off, offering a front-row seat to his father's addiction. Yet despite witnessing his father at his worst—“all that remained in the room were a few rolled-up dollar bills on a nightstand, a glossy porno magazine on the floor, and a frightened old man shivering on the bed, his nostrils cemented shut with a mixture of blood and mucus, his eyelids sealed closed by some bodily fluid whose origins I couldn’t even guess at”—the author also became a drug user, experimenting primarily with marijuana, though he tried cocaine as well. Itzkoff’s sheepish admission of personal guilt removes the possibility of a moral high ground, and to the book's benefit, levels the playing field, allowing both father and son to face their struggles together. The pair attempted to overcome their obstacles by attending joint therapy, utilizing their drug use as common ground for a fresh start. But after the therapy proved unsuccessful, Itzkoff made one final attempt at reconciliation—this time, simply by listening to his father's painful tale from start to finish and beginning the slow work of righting the wrongs of the past.

A satisfying journey into the depths of hard-heartedness and the struggle to heal an old wound.