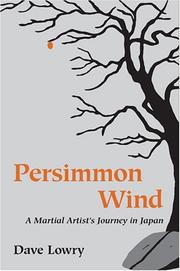 A Martial Artist's Journey in Japan

A reflective and entertaining journey through Japan, as the author seeks to reconnect with his martial arts sensei.

Lowry is a student of koryu (not to be confused with kendo), a style of Japanese classical swordsmanship. Koryu is a medieval art, like Noh and the tea ceremony, a style of combat born on the battlefield–but more importantly, it’s a way to address the world (though an esoteric one: Lowry may well be the only American practicing the art in the United States). Indeed, present-day practitioners refrain from exercising its fatal possibilities. Lowry’s sensei left the U.S. to return to Japan, urging Lowry to follow. Though his life headed in a different direction, he never forgot his training–when the time was ripe, he journeyed to Japan to join his sensei. The narrative revolves around this pivotal decision, and it provides a warm center from which the author expounds on such topics as the glories of a Japanese bath; the evolution of the Samurai caste; the peculiarities of Japanese landscape architecture; the elements of proper sandal-tying; the custom of the premarital shenanigans called yobai; and the teachings of mikkyo Buddhism. He also includes the vital story of the sword–what it reveals about Japanese life and technology, social structure and aesthetic values, etiquette, apprenticeship and the process of education. Lowry’s seriousness lends an earnest cast to the proceedings, but he’s not without a sense of humor–commenting upon his accomplished slurping of noodles, a friend’s wife notes, â€œHe really sucks!”

A broad and deep look at Japan’s medieval referents, and a capable illustration of a martial art form steeped in rich tradition.